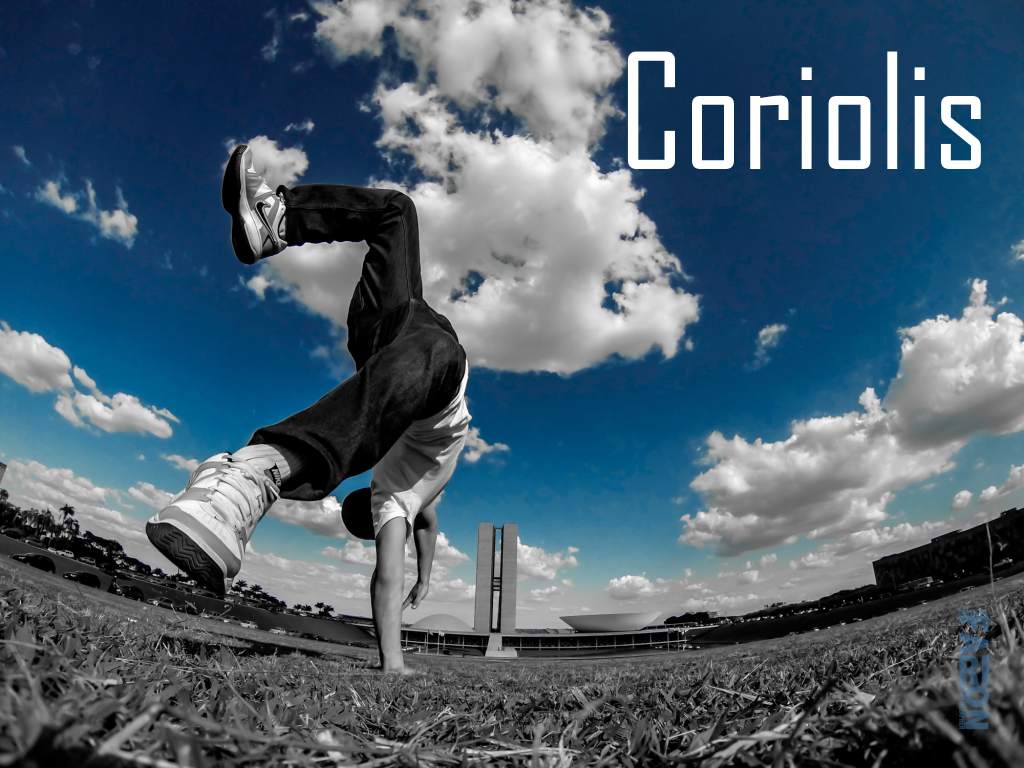 The Coriolis force is an imaginary (but convincing) sideways shove. You imagine you feel it when you walk around on a spinning object, moving from a fast spot to a slow spot.

If you noticed I forgot to say, and vice versa, then you are quick. If you say it out loud, you are annoying. Ask your woman to slap you, to help you stop.

But I digress, probably because this Coriolis stuff is a bit abstract, since we don't spend a lot of time on spinning objects. But we could, if we wanted.

Oh wait we do, because we live on Earth. The fastest spot on Earth is the equator, which is 25,000 miles long. You traverse it in a day, over a thousand miles per hour. But your velocity drops as you move North, toward the spin axis in D.C.

One practical implication: As hot air migrates from the equator to Washington, it must slow down by 1,000 MPH, making wind and other phenomena that scientists refer to as weather.

In Gaia's Wasp, the alien invaders made their own gravity by spinning The Unexpected Finger (their spaceship.)

The Unexpected Finger's largest chamber was her aptly-named hangar, filled with hanging runabouts.

Did I say aliens invaded? If, hypothetically, that were true, it would spoil the surprise. So try to pretend you didn't notice.

If you stood at the Finger's widest point (the hangar) your feet would rest on her outer wall, farther from her axis and hence moving faster than your head.

Your feet circling the Finger faster than your head. Makes me slightly dizzy.

So if your head fell off your neck, it would pretend to accelerate sideways by 2.5 m/s on its way to your feet, and would bounce across the floor some distance.

In reality, your head would pick up hardly any sideways speed until it hit the faster-moving floor. This is the problem, and is called the Coriolis force. Named, one presumes, for some guy with an interesting name and some spare time.

For comparison, on Earth, 2.5 m/s is the speed you pick up from falling one foot, which is more than a head.

The Finger's hangar was filled with hanging runabouts. They were taller than you, so they had more reason to worry about Coriolis.

The typical runabout was 6m long, hanging vertically with its nose only 2m from the spin axis. As the Finger rotated, it carried the runabout's nose around a circle of radius 2m. Each rotation carried the nose 2π × 2m = 12.5m in five seconds, so the nose moved constantly sideways at 2.5 m/s.

The runabout hung above its launch hatch, ready to drop through. The hatch was on the Finger's perimeter, a circle of radius 8m, so the Finger's rotation carried the launch hatch sideways 2π × 8m = 50m every five seconds, or 10 m/s.

If the runabout were centered above the hatch and dropped, the speed difference between the 2.5 m/s nose and the 10 m/s hatchway would be hilarious.

Wait, the runabouts were only 6m long? Can something that small carry enough fuel to fly back and forth from orbit?